No, I don’t mean to sound like a fearmonger, but the blight affecting Lebanon’s pine trees should be taken seriously. Much more seriously.

The story broke over a month ago as news outlets rushed to report on the dying pine trees of Horsh Beirut and Chouf. Discolored branches – red, yellow and orange – we were told were among the symptoms of a tree infested with bark beetles.

But, the hype has since died down, and with that general interest.

The problem is worth so much more than a few reports; Lebanon’s entire population of pine trees continues to be under threat, and so are its people – both financially and in terms of general health.

When trees die, we die

The connection between invasive beetles that have destroyed millions of trees and subsequent heart disease and pneumonia in human populations has been made.

The “relationship between trees and human health,” is convincingly strong, The Atlantic wrote a few years ago in the aftermath of the death of 100 million trees in the United States’ Midwest after a bug, similar to those affecting Lebanon’s trees, spread through ash forests.

“[…] the absence of trees would mean the near absence of oxygen — on the most basic level, we cannot survive without them. We know, too, that trees act as a natural filter, cleaning the air from pollutants, with measurable effects in urban areas.”

But that’s not all. Trees and other elements of the natural environment affect our health in more nuanced ways. A 1948 study by Roger Ulrich showed that patients who were provided a view to nature recovered quickly and with lesser complications.

“Natural scenes … are almost effortlessly able to capture people’s attention and lull them into a sort of hypnotic state where negative thoughts and emotions are overtaken by a positive sense of well-being.”

In a previous blog post, I too had listed the health benefits of “forest bathing”. As Edward O. Wilson writes in his 1984 book Biophilia, being in nature is rooted in our genes and biology.

For those who are unaware, Lebanon’s pine tree forests constitute our last remaining green lung. They regulate temperatures and prevent soil erosion and desertification. They are also home to many species of fauna and flora. Apart from that, pine-nut-bearing trees that produce ivory-colored seeds, which locals refer to as “white gold” (الذهب الابيض), are an important source of income for many families. This is why a conference that I attended a little over two weeks ago on pine trees seemed to attract pine nut harvesters more than anyone else.

Held in the pine-laden village of Dhour Chweir, the conference left me with a heavy feeling – one based on our infamous track of crises mismanagement.

Although it involved many top-notch experts in the field, including Dr. Nabil Nemer, Ph.D. in Forest Entomology, Mr. Louis Lahoud, Lebanon’s Director-General of Agriculture at the Ministry of Agriculture and many others, the parasites that were identified by the experts as the main culprits behind this problem seemed anything but easy to manage. They are the Western Conifer Seed Bug (Leptoglossus occidentalis), the Pine Shoot Beetle (Tomicus destruens), and Wood-boring Beetles (Cerambycidae and Buprestidae).

The bugs and beetles are invasive, and without a comprehensive governmental plan, many trees will die.

So what brought them here?

Native to North America, the Western Conifer Seed Bug (sometimes colloquially called stink bugs) has made its way to Europe and now, Lebanon.  It is hypothesized that this insect may have been introduced to Europe through trade of timber. Warmer winters brought about by climate change and rising temperatures, allow them to thrive. (In fact, the words “climate change” were mentioned at least 20 times at the conference.)

As for the Pine Shoot Beetle, which is native to most of Europe and Asia, and Wood-boring Beetles, found in Neotropical realm, they form a symbiotic relationship with a certain type of fungi (commonly the Blue Stain Fungi), overpowering the trees’ chemical defenses. The beetles carry the fungal spores in special structures, referred to as galleries, gradually infecting and killing the trees.

The more trees die, the more favorable the conditions become for forest fires. In that sense, fire and bark beetles are locked in some “malevolent feedback loop, with fires inviting beetles to devour weakened trees, and beetles creating fuel for future fires.”

Lebanon is already ill-equipped when it comes to dealing with forest fires. With Summer right around the corner, the pests and diseases affecting pine trees must swiftly be addressed.

-According to Dr. Nemer, if the pines are present on your property, it’s best to cut down infected trees and remove the stump altogether. Burning the tree away from others to decrease the chances of cross-contamination would be your best option.

-If the trees are not on your own property, contact the concerned authorities. Raise the issue to your local municipality or the Ministry of Agriculture directly.

Here are some useful numbers:

-After infested trees are removed, surrounding trees must be sprayed with pesticides according to a memo by the Ministry of Agriculture. They include Thiamethoxam 25% (10-15 grams/tree, 3 times every 45 days), Lambda-Cyhalothrin and Chlorpyrifos (every 3 weeks for a period of three months), and Deltamethrin Ultra ULV.

Thiamethoxam is banned in the EU; it has been found to cause bee colonies to collapse. But Georges Khoury from the Ministry of Agriculture insists these pesticides are Lebanon’s only hope for now.

“We, as a ministry, will alert all beekeepers when we launch a mass spraying assault using helicopters,” he told Newsroom Nomad.

When asked if the Ministry is looking into cultivating and introducing natural predators, Khoury said that it would take much research and years before such a strategy can be adopted by the Lebanese government.

“We have to see which ones work and which parasitoids can be introduced to Lebanon that won’t conflict with our environment.”

But, as common knowledge would have it, pests do develop resistance to pesticides with time, not to mention the risk such poisons pose to other animal species in the wild. This is why several entomologists I spoke to (who wished to remain anonymous) stressed on the need that the concerned authorities start looking into introducing natural predators sooner rather than later. Intrigued by their suggestions, I started researching, and after much time I found a few cases where the use of natural predators has helped control pine beetle populations.

In Italy (where the use of pesticides on pine trees is banned) wasps were used as control agents for the Western Conifer Seed Bug. Similarly, the Clerid Beetle has been reported as an important predator of many wood-boring beetles, including the Pine Shoot Beetle and other wood-boring beetles.

Pheromone traps (insect traps that use pheromones to lure insects) are also seen as one of many solutions as per Discover Magazine.

Whatever you do, don’t wait!

If you see the symptoms of a beetle infestation contact your local authorities. If these beetles continue to spread, we may lose Lebanon’s pine forests, and maybe even cedars.

One thought on “If Lebanon’s pine trees die, so will we”

Beirut cuts down trees, activists up in arms

Mon Jun 5 , 2017
A recent decision of urban tree removal by the Beirut municipality in Msaitbeh over the weekend has solicited vehement condemnation from online activists and the […] 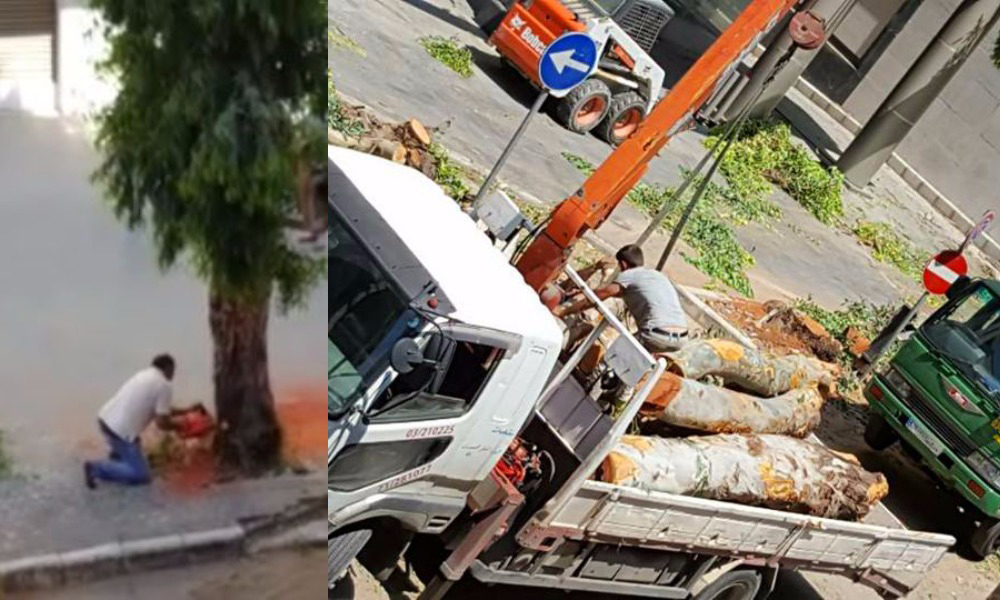