I can’t believe that I have to actually tell people not to panic because we still have some semblance of marine life off our coasts. The only time we should actually panic is when the sighting of whales, dolphins and other sea animals is no more.

A recent report that said that the appearance of whales this week off the coast of Tyre was “bad news” caused the entire debacle. The article, published by al-Joumhouriya, which framed the whales spotted by local fishermen as something to be feared (later edited), without so much as mentioning the distance from which the photos and video of the cetaceans were shot, what species they were, and most importantly that they pose no danger to swimmers, caused the stir.

Environmental journalist and friend, Fadia Jomaa (Greenarea.me) and AUB Marine Biologist Michel Bariche have been making multiple media appearances since the article was published, in an attempt to dispel the fear and raise awareness.

“The reason why people are afraid is because one news report said that this was bad news for Lebanese waters,” Michel Bariche, professor of marine biology at the American University of Beirut, told The Daily Star.

“But absolutely not – the [sperm] whales pose no danger at all.”

Green Area, an environmental organization and website, also released a statement in the aftermath of the report.

“The fishermen were in deep areas when they saw the whales. This did not happen close to the shore,” Rayan Moukalled, administrative director of the environmental group Green Area, told The Daily Star. “They didn’t attack anyone or anything, just ate some fish in the nets.”

Definitely not the first time

This isn’t the first time that sperm whales are spotted off the Lebanese coasts. In fact Newsroom Nomad has frequently written about such sightings. Just in November a male sperm whale (bull) was spotted after he surfaced to breathe. He was filmed by a group of sailors who also sent me this spectacular video.

Unlike bulls who swim alone, female sperm whales travel in pods. The ones spotted off the coast of Tyre were most probably a group of females and their calves.

The Mediterranean sperm whales are endangered as their numbers continue to decline. According to this three part documentary I found, there are several risks in the Mediterranean Sea that are directly affecting populations.

Human presence, pollution and plastic debris are among the top reasons; several sperm whales have been found dead off the Greek coast with plastics in their stomachs. Next comes noise and shipping: 30% of the worlds shipping traffic occurs in the Mediterranean Sea, and as a result, many whales are often hit by ships. The Mediterranean suffers the heaviest maritime traffic than any other sea in the world; around 220,000 vessels cross the Mediterranean Sea every year. With more traffic, comes more noise. Sperm whales, like other cetaceans, use sound to navigate, communicate, and find their pray. With growing noise pollution, scientists fear these abilities may be significantly reduced. There is no silent oasis anywhere in the Mediterranean for these cetaceans who have to hear all this noise 24 hours a day. On top of that, illegal driftnet fishery poses the highest risk to these animals, who become entangled and drown.

If nothing changes, if no protection measures are taken for the Mediterranean sperm whales during the next decades, the level of the population will fall below a number that can guarantee this species survival.

According to Michel Bariche only 2500 to 3000 sperm whales remain in the Mediterranean.

For more interesting facts about the sperm whale, check out my last post on the topic.

Whales, dolphins and sharks and so much more

We’ve seen several videos and photos showing dead turtles, dolphins and sea lions across Lebanon. Although the country is a signatory to the Barcelona Convection, which calls for the protection of the marine environment and the coastal region of the Mediterranean, little is being done in terms of decreasing sea pollution and/or the protection of endangered species. Dolphins, whales, turtles alongside many marine animals are in danger of ingesting plastics -particularly bags they mistake for squids or jellyfish – and other toxins found in our waters. If the toxic material doesn’t get them, dynamite fishing, mass shipping and other threats will, and have.

Apart from the al-Joumhouriya piece, NBN recently released a video this week warning people from a “Shark Invasion” (because ‘invasion’ has a nice ring to it, right?).

Sharks aren’t nearly as dangerous as we believe they are. In fact, they are more afraid of us than we are of them. Sharks more likely attack surfers because they mistake them for seals. Also, overfishing, increased human activity and decreasing territories are driving sharks (like many other animals) closer to humans (especially fishermen) in search of food.

Sharks don’t even like humans (can we blame them?)

According to Culum Brown, a fish biologist at Australia’s Macquarie University, “sharks don’t like to eat people … studies show they respond strongly to the smell of seals and fish, but not humans. The trouble with sharks is that they are inquisitive and when checking out a potential prey item they typically come up and have a nibble.”

This is perhaps what happened with this Lebanese fishermen, who –according to AnNahar – was reportedly attacked by a shark last year. But, with more understanding comes more ways to navigate such issues. Fishermen should not dive unprotected at a 2000 meters distance from the shore and deeper than 25 meters. There, it is the sharks and other marine animals’ territory. If they do, they must be extra vigilante and wear protective gear.

Over half of the Mediterranean’s shark and ray species are at risk of extinction, the International Union for Conservation of Nature (IUCN) warned in December last year, blaming overfishing for plummeting numbers. They must be protected.

When Lebanese fishermen hunt sharks, they are indirectly harming the ecosystem that provides them with fish. Without sharks, corals die. Without corals, seas die.

Think we don’t have coral reefs in Lebanon? Think again.

Wed May 10 , 2017
A day after four stingrays were freed subsequent to getting entangled in old fishing nets off the coast of Ramlet al-Baida, further south from Beirut, and […] 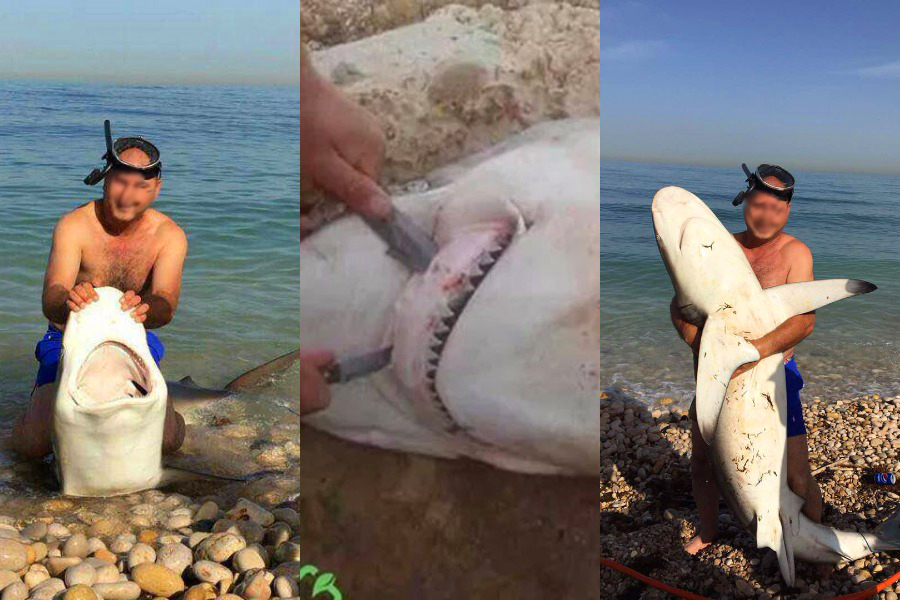