It is all said to have started in Baalbeck some 1,700 years ago; the St. Barbara tradition to dress up in costumes and visit one’s neighbors, singing and chanting and wishing them well. The custom, which remains in practice, albeit scarcely, is believed to have originated in the 3rd century, back when Baalbeck was better known as Heliopolis of Phoenicia (a Latinization of the Greek Hēlioúpolis (Ἡλιούπολις), meaning “Sun City”). In that period, the city was under the reign of the Roman Empire.

To this day, the feast of St. Barbara, which entails the use of masks and the offering of wheat-based treats and sweets, is celebrated across Lebanon, Syria, Palestine, and Jordan. The celebrations are a reenactment of a story that has been passed down the generations. Although the St. Barbara feast is now viewed as the region’s counterpart to Halloween, it predates the latter by several hundred years.

There are many versions to Barbara’s story, with some saying that it took place in modern-day Turkey, but most hagiographies place the saint, who was the daughter of a rich pagan merchant, in Baalbeck during antiquity. She is said to have possessed great beauty, leading her father, Dioscorus, to hide her from the eyes of strangers by locking her up inside a tower (also believed to be the inspiration behind the German tale, Rapunzel, and the Persian legend of Rudāba). The story goes that in her seclusion Barbara began to marvel at the First Cause; the origin of life, and the creator. By day she would gaze upon the meadows, hills and rivers; by night the majestic vault of the heavens.

Her isolation does not stop the fame of her beauty from spreading throughout the city, with many seeking her hand in marriage – only to be dismissed. Concerned that his daughter’s temperament had been affected by her life in seclusion, Dioscorus permit her to leave the tower. Upon her release, Barbara meets young Christian maidens and priests who then convert and baptize her. The news does not please her father, who consequently orders for her imprisonment and torture.

The story has many iterations, but most concur on descriptions of her torture and miraculous healings by morning. She eventually escaped, and in her attempt to flee persecution used several disguises, including masks and animal skins. Relying on the kindness of strangers, she knocked on doors along the way, hoping they would give her food, namely harvested wheat and pomegranate. The chase would only be short-lived as she was eventually captured and beheaded by her father, who would shortly thereafter be struck by lightning.

Local St. Barbara tradition involves the planting of wheat seeds or sometimes chickpeas, barley grains, beans, lentils etc) on a bed of cotton on December 3rd. When the seeds germinate and grow, they are usually placed below the Christmas tree, next to the nativity scene. Apart from her receiving wheat and other harvest legumes from strangers, in her escape she is said to have passed through great wheat pastures that would hide her tracks. This is why the serving of boiled wheat with nuts and pomegranate seeds is an essential part of the tradition.

The song and the treats:

“Heshle Barbara, maa banet el Hara” (Barbara runs amok with the girls of the neighborhood) is a popular tune sung by children and young people who practice the tradition on the night of December 3. Donning masks and costumes, they walk through their neighborhoods, knocking doors and chanting the words of the song. The custom is a recreation of Barbara’s story, specifically her wanderings with Christian maidens. Another song goes, “harej harej Barbara amoudein w minshara, hil el-kees w etina; lawla el-sheikh ma jina” (harej harej Barbara, two poles and a saw, untie the bag and give us; if it weren’t for the sheikh, we would not have come over). Though the latter is not as popular as the former, “harej” is a word used by villagers to refer to face masks. This tune is often associated with people from mixed Muslim-Christian neighborhoods or towns who still share the occasion.

The sweets prepared for this night include qatayef (mini pancakes stuffed with a mixture of walnuts and sugar or curdled cream). It’s not exclusive to this occasion; homemade sweets for eids are often part of a tradition shared by Muslims and Christians across the Levant. They also include Maakaroun and Zlebye, which some believe can be traced back to the Phoenicians who would consume these sweets for fertility (maakaroun are symbolic of the female genitalia, and zlebye are their phallic counterparts). Although this is a theory I cannot verify for lack of available information on the topic, it is something I would not entirely dismiss. Many culinary treats and traditions from the era have survived to this day. They include the tannour bread; the offering of pots and pans in many churches for fertility (Mar Qozahaya Monastery is one example); and the construction of small shrines (mazarat) we see along the roads – a custom that arguably predates the Roman Empire where temples and shrines were built as the fulfillment of a vow (nidr) made in exchange for safety or victory.

The details related to Barbara’s purported use of masks is pertinent to the Phoenician era. Several archaeological discoveries have found many terra-cotta masks with openings for the eyes and mouth, which suggests that the masks were produced to be worn by the living to ward off evil, and the dead to frighten away demons. Although scholars still debate how the idea of masks was first transmitted, craftsmen of the era disseminated original anthropomorphic terra-cotta masks throughout the Mediterranean region, the Louvres confirms. This may mean that the tradition to disguise oneself is much older than previously thought, and it may well suggest that wearing masks may have originated East of the Mediterranean.

Sadly, the St Barbara tradition – like many others – is disappearing. Here’s a video shot in Qobayat in 2010. According to Rodrigue Zahr, the photographer who filmed it, this year’s celebrations are nowhere near as enthusiastic as its predecessors.

Lebanon still holds several traditions that are originally Phoenician. As mentioned above, they include food, custom and also language. It is a shame that such traditions and stories are no longer viewed with interest. They hold the key to a great civilization, which once spanned beyond the Levant, and whose remembrance within an inclusive viewpoint as opposed to how its currently being depicted as belonging to some and not all, could serve as a lesson in modern times.

Hold the celebrations: Abolishment of Lebanon’s ‘rape law’ not yet in the bag 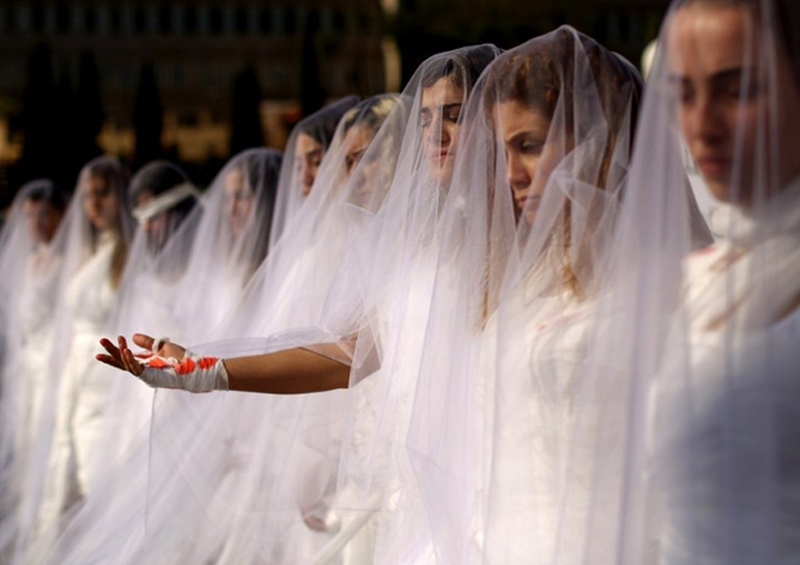