No, I’m not here to talk about StarWars, but I am here to talk about the “force” or “forests” to be more specific. By mid century, temperatures in the Middle East will climb high enough to render the region uninhabitable, a new study published by the Institute for Chemistry and the Cyprus Institute in Nicosia found.

According to the study, temperatures could reach approximately 45 degrees Celsius during the day and become the norm by the end of the century. Heat waves will also be longer, lasting up to 80 days by 2050 as opposed to the current 16 day margin. Isn’t that something that should force us to awaken? Or should we remain on the dark side*?

The weather will compel 500 million people in the region to relocate. Lebanon among other Middle Eastern nations will suffer the way of Alderaan as the weather strikes again.

Although Prime Minister Tammam Salam signed the climate change agreement in New York last month, experience has taught the Lebanese that even written promises are rarely ever fulfilled. The PM pledged Lebanon’s willingness to “fully conduct its role as an active member in the U.N treaty for climate change and the implementation of the long term goals of the Paris Agreement,” listing the recent “solution” to the garbage crisis as a step forward towards forestation, which [of course] requires more support from international donors, his press office relayed. Wookieleaks worthy material if you ask me.

Less than 13% of Lebanon’s forests remain, according to statistics released by the Ministry of Environment back in 2011. Given the lack of more recent information one can only speculate where that number now stands in light the catastrophic effects of the garbage crisis, lack of public awareness, frenetic construction, and forests fires that will surely sweep the country as the weather gets increasingly warmer and droughts set in.

2015 was among the hottest years on record. It was also the driest in the Middle East. Without the commitment of an effective government to the preservation of what little remains of our natural resources, our chances seem dim. Increased CO2 emissions envelop our planet like a deflector shield, and suffocate the life which gasps for air beneath it. We desperately need the force (read: forest) if we are to survive the effects of climate change. Why? Because forests are more than just trees.

They keep us cool by growing a canopy to hog sunlight, creating a vital oases of shade that reduces the need for electrical devices that run on fossil fuel energy, cutting CO2 emissions.

They block wind, providing a buffer for wind-sensitive crops, which also protects the process of pollination. They feed us; give us medicine; help us build things and create jobs.

Without forests, we will perish.

Humans have always looked to the stars for answers. In modern times this fascination with the cosmos resulted in the creation of a myriad sci-fi movies that include Star Wars -a film whose iconic phrase is being celebrated today. “May the force be with you” holds significance in the battle of good against evil, but I believe it is much more fitting to say “may the forest be with you” since our fight against corporate greed, ignorance, and climate change will incline us to preserve them as they become ever-rarer.

A desire to conserve forests should not be viewed as a mere nostalgic Jedi fantasy. Hundreds of studies on the subject insist that green spaces are vital for the overall health of the planet and to the physical and psychic health of people living in nearby residential areas. It is not for esthetic purposes that highly rational societies all over the world have established conservation societies, and parks amid their cities. It would be an egregious mistake to consider mankind as wholly apart from nature. Our survival is linked to that of many species which may only exist in a wild setting. Yet those issues are hardly considered as part of the equation when our government enacts any form of regulations and allocates funds to public projects. But let us not fall victim to the ways of the dark side, let us walk the path of the Jedi masters and preserve our forests for future generations.

7 thoughts on “Weather prediction for Lebanon and Middle East spells disaster. May the “forest” be with us”

Thu May 5 , 2016
According to the newly released international transparency index, Lebanon has exceeded it’s neighbors in regards to organized misappropriation of public funds, and has finally attained […] 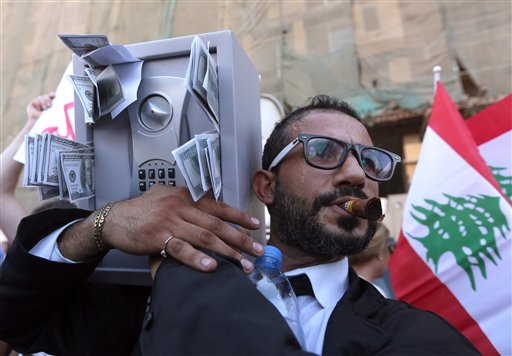