Let’s forgo the formalities and the lengthy intros; Lebanon is on the edge of a massive ecological catastrophe, yet we remain silent – in a state of perpetual somnambulism.

Perhaps we are fatigued, scared, or maybe just too damn lazy. But to keep ignoring the myriad environmental problems affecting our very own existence is to accept our own demise and that of our children.

There are countless pressing environmental issues threatening the food we eat, the water we drink and the air we breathe. Here are just some of them.

Why we do nothing

In his 2005 book titled “Collapse,” American civilization scholar Jared Diamond identifies the four stages of societal decay. They are:

If we just look at the most recent garbage crisis, we can actually tick all the above categories off the checklist. The authorities failed to anticipate the problem (the closure and overcapacity of the Nehmeh landfill before the due date); they failed to perceive the problem after its arrival (leaving citizens living with and under mounds of stinking, rotten trash for months at a time); they failed to attempt to solve the problem after becoming aware of it (finally deciding on two seaside dumps that are in no way viable solutions); and now, the problem has become unsolvable (the Bourj Hammoud scandal and the dumping of civil war era trash into the sea without erecting wave breakers or taking any preventive measures is only the tip of the iceberg).

Diamond also coined the term “creeping normalcy,” which basically means that the rate of change is slow enough that societies become normalized to changes within the natural environment. When changes are incremental they become inconspicuous to each generation. Societies therefore slowly destroy themselves without noticing until it’s too late.

Apart from the 2015 protests, people have more or less become accustomed to the shortcomings of successive administrations. Just a few days ago, lawmakers agreed to a new election law after 8 years and three term extensions. The law fails to include a women’s quota – one of the main promises echoed by established political parties in the run-up to the agreement. Were people outraged? Perhaps, but only a few protested and for that they were beaten up.

“Creeping normalcy” is a phenomenon that is not new to the environmental sphere. Conservationist and journalist George Monbiot refers to this disconnection from nature as the “second environmental crisis”. He argues that as we lose connection to nature, we become less inclined to fight for it. We, the Lebanese, simply call it the rule of “3ade”.

The garbage may return to the streets? 3ade.

The seas are beyond polluted? 3ade

We have to pay our utility bills twice? 3ade

This ability to normalize the most atrocious of circumstances is what is allowing this creeping normalcy and subsequent ecocide to continue.

Ecocide is defined as “extensive damage to, destruction of or loss of ecosystem(s) of a given territory, whether by human agency or by other causes, to such an extent that peaceful enjoyment by the inhabitants of that territory has been or will be severely diminished.”

It is a legal theory proposed by lawyer Polly Higgins, also known as the “Earth’s lawyer”. This international law theory attempts to prohibit the mass destruction of the earth through the creation of a legal duty of care for all inhabitants that have been or are at the risk of being significantly harmed because of ecocide. Its aim is to prevent and prohibit both human-caused ecocide and natural catastrophes and has been proposed to the United Nations International Law Commission to amend the Rome Statute by making ecocide the 5th international crime against peace.

Does ecocide apply to Lebanon?

It doesn’t take a rocket scientist to answer this question. Our diminishing forests, our polluted rivers, our polluted air, seas and lands, and the subsequent rise in pulmonary disease and cancer rates stand testament to the self-serving policies that have thus far only benefitted the very rich at the expense of the very poor and of course environment. The laws through which such crimes are being navigated are made by men in power, for men in power, and they stink of foreign complicity.

It’s not just the Lebanese who are in danger, 400 million EU citizens are now at risk of getting cancer from swimming in contaminated waters or eating contaminated fish courtesy of the Lebanese government’s dumping of toxic waste into the Mediterranean Sea, journalist Martin Jay writes in a recent op-ed.

“Not only did the EU know about the massive sea-dumping operation, which was built at the end of the summer of last year, but the EU’s own ‘embassy’ here in Beirut deliberately kept quiet about it. Why? Because it did not want to annoy the Lebanese government, which is hosting almost 2 million Syrian refugees…

The European Commission is keeping tight-lipped about what might be the largest environmental calamity in the Eastern Mediterranean – which not only threatens marine life, but also the health of Europeans holidaying in Greece – because it is too afraid of the political fall-out in Europe [Read: Germany] if Syrian refugees start to leave Lebanon and head for Europe…

Lebanon is ranked by Transparency International as one of the most corrupt countries in the world. And yet it receives well over 200 million euros a year in cash from Brussels just to contain 1.8 million Syrian refugees. It’s actually not even a lot of money. For this pathetic amount, Europe has to console itself that it won’t have a refugee problem from Lebanon in exchange for possibly some of its 400 million citizens getting cancer from swimming in contaminated waters or eating contaminated fish. Add to that the gradual extinction of indigenous turtles who lay their eggs on Lebanese beaches, and the stink just fills your lungs…

“The pollution never stops at one point,” Professor Najat A. Saliba of the AUB tells Jay. “The ocean is a living beast and currents are always in motion. Trash and leachates will move mainly from the south to the north as this is the prevalent wind in Lebanon.”

According to the United Nations Environment Program, gender definitely plays a role when it comes to environmental damage and the health of our natural resources:

The environment isn’t a luxury item, an accessory that we can do without. It is our home, an extension of ourselves as human beings, as communities, as functional societies.

Environmental attorney Josephine Balzac writes: […] society has “failed to realize the interconnected and interdependent relationship between humans and the environment… It is the recognition that the root source to our social and environmental issues stems from the unfortunate masculine mentality that drives our entire global society. This idea that natural resources are commodities to be extracted and exploited causes environmental degradation to potentially the point of no return…

Our laws have never allowed for nature to have rights or even allowed to have standing. Justice for the environment is not a right in our system of government, which was created by men. The laws do not treat nature fairly, nor do they give her any strength or power, and the laws have always favored men. [They do not] protect our natural resources, [or] protect our sources of life. Without nature, we die. We need her to survive. The patriarchal laws and government systems have never accepted this as true, have never understood this very principle, which is nothing more than common sense.

This dominant worldview is the very reason why women have been oppressed, sexualized, controlled, and exploited by men with a capitalistic mentality. Women and nature are inferiors in a man’s world and the goal of ecofeminists is to change this view and make way for their liberation, by having rights in and of themselves. Rights must be given through laws like ecocide that prevent the tyrannical corporate control that destroys our life source.”

Yes, there is a certain level of compassion fatigue that has clicked into gear. But, breaking out of this cognitive deadlock is crucial, because if things continue at this rate, we will simply collapse under the weight of our very own trash.

The upcoming parliamentary elections, with or without a quota, with or without the blessing of the EU, must see more women on the frontlines of change, because the real change, the shift in the paradigm that we all aspire to, must be birthed by the women of our nation. Only then, would we have shaken and tried the ol’ boys club for their crimes against peace. As for the EU? It’s about time Europeans wake up and smell the shit.

One thought on “Successive Lebanese governments, EU must be tried for ecocide”

Mon Jun 26 , 2017
If it’s not the garbage, the illegal fishing methods, or the pollution, it’s seaside construction. The threats facing marine turtles that come to south Lebanon’s […] 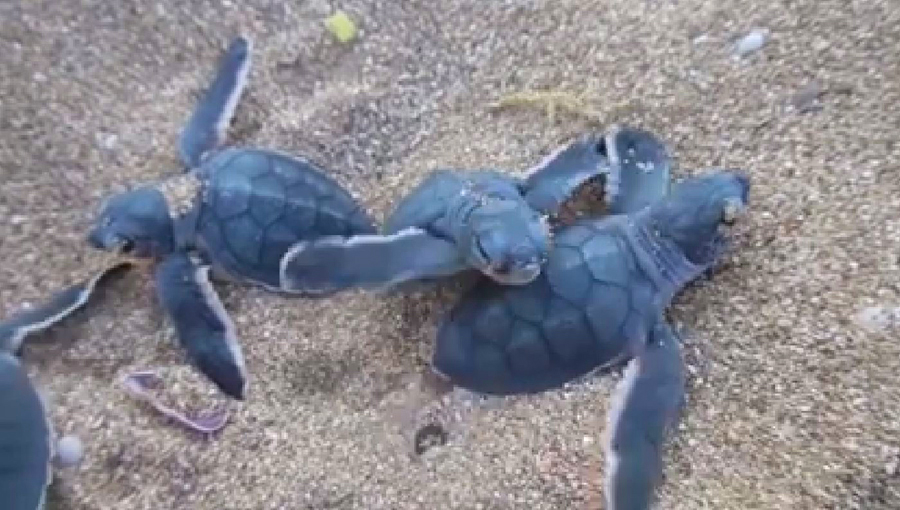