A lone whale was spotted swimming off the coast of Halat, north of Beirut, according to a video posted by MTV on Thursday. In the video, filmed by a group of sailors, the whale breaches the water’s surface before swimming away from the boat. It appears to be alone; a trait more common in male whales.

It took quite the time and effort for me to try and identify the cetacean, as it only appears momentarily. From the white streaks on its head, to its rather small dorsal fin, it appears to resemble the Mediterranean sperm whale.

Towards the video’s end, the sailors express concern: “There appears to be blood … do you think he’s hurt?” one of them asks.

Though the condition of said whale remains unclear, particularly in terms of how it presumably got injured, it doesn’t take an expert to point out the man-made risks that many of our marine animals face. Just in September, a dolphin was found dead. Before that, and in a story that went viral, a marine turtle was reportedly pulled out of the water and hit on the head. That story was only one of many others that shed light on the precarious state of our marine animals, turtles in particular, as many have been found dead in recent months along seaside landfills.

This isn’t the first whale sighting in Lebanon, in fact just last June a Cuvier’s beaked whale pod was spotted off the coast of Dbayeh.

Unlike the Cuvier’s beaked whale that currently holds a conservation status of lower risk, the Mediterranean sperm whales are endangered as their numbers continue to decline. According to this three part documentary I found, there are several risks in the Mediterranean Sea that are directly affecting populations.

Human presence, pollution and plastic debris are among the top reasons; several sperm whales have been found dead off the Greek coast with plastics in their stomachs. Next comes noise and shipping: 30% of the worlds shipping traffic occurs in the Mediterranean Sea, and as a result, many whales are often hit by ships. The Mediterranean suffers the heaviest maritime traffic than any other sea in the world; around 220,000 vessels cross the Mediterranean Sea every year. With more traffic, comes more noise. Sperm whales, like other cetaceans, use sound to navigate, communicate, and find their pray. With growing noise pollution, scientists fear these abilities may be significantly reduced. There is no silent oasis anywhere in the Mediterranean for these cetaceans who have to hear all this noise 24 hours a day. On top of that, illegal driftnet fishery poses the highest risk to these animals, who become entangled and drown.

If nothing changes, if no protection measures are taken for the Mediterranean sperm whales during the next decades, the level of the population will fall below a number that can guarantee this species survival.

These animals are amazing. While researching the topic I found that they have incredible traits. The females remain in a pod, while males become solitary upon maturing. When a female gives birth, others act as midwives. Later, and when the mother dives in to feed, a designated female remains with the newborn whale calf to “babysit” it near the surface, away from threats or predators. Sperm whales can recognize each other’s voices, or more accurately clicks. Adult sperm whales have the biggest brains on earth. Yes, that too. These are just some of the remarkable things I learned, and I just wish there were more efforts to protect them both in Lebanon and across the Mediterranean.

Lebanon is a signatory to the Barcelona Convention, which calls for the protection of the marine environment and the coastal region of the Mediterranean, however little is being done in terms of decreasing sea pollution and/or the protection of endangered species. Dolphins, whales, turtles alongside many marine animals are in danger of ingesting plastics -particularly bags they mistake for squids or jellyfish- and other toxins found in our waters. If the toxic material doesn’t get them, dynamite fishing, mass shipping and other threats will, and have.

Contrary to popular belief, Lebanon’s seas are teeming with life even though we have spared no effort to render them almost uninhabitable due to our ineffective waste management policies and lack of social responsibility. Marine turtles, whales, sea lions, and various other animals swim our waters, but little awareness is being raised.

Schools and educational institutions must introduce environmental awareness programs as a means of raising generations who can forge better solutions to what is currently in practice.

Solving the garbage crisis once and for all, and dispensing of archaic “solutions” like seaside landfills and landfills in general that do not meet international eco-standards, will also play a vital role in protecting biodiversity.

Alternative means to support the livelihoods of local seamen can also be introduced. This can include whale and dolphin tours by fishermen, supported by the Environment, Tourism, and Agriculture Ministries. Local fishermen can also be trained in how to assist and rescue distressed animals like the whale in the video above.

These are just some solutions from the top of my head. It doesn’t take much, I mean, it’s not rocket science, but in a political climate that is conciliatory by design, little space is left for actual work, be it social, environmental, or economic. I can only hope that those in power will the see the profit that comes from preserving the environment and protecting biodiversity. There are tons of jobs that can be created; myriad opportunities. In layman’s terms, it can either be a win-win situation for both man and environment, or it can be a total disaster.

Lebanon’s environment as a whole is under threat. We have innumerable issues to tend to that include forest fires; the decline of marine life; sea, air, and land pollution; frenetic shoreline construction; and of course the infamous garbage crisis. There is already too much on our plates and we can’t keep adding fuel to the fire. Climate change is a reality already at our doorsteps. It will not go away if we look in the other direction. It’s time we pay attention; it’s time we push our leaders, politicians, incumbent or aspiring, to propose and support socio-economic environmental programs in the lead to the upcoming elections. That’s how I will vote: for a program, not a person.

Sun Nov 20 , 2016
A prank television series that airs on OTV titled “Haddi Albak” has become the subject of social media outrage after an article criticizing the program […] 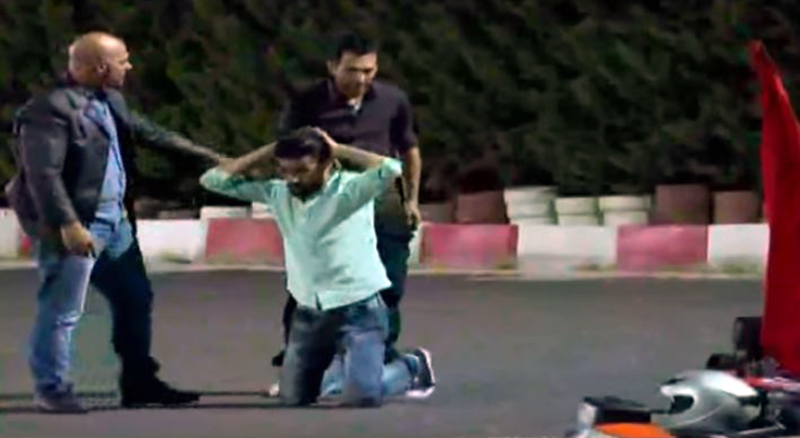