A Lebanese woman, identified as Lina Kh., was reportedly held against her will by her ex-husband and several armed men in her matrimonial home in the town of al-Ghinneh on Thursday night after she had arrived in the company of two police officers, an attorney and a priest assigned by the church to implement a court order that grants Lina custody of her four underage children.

Lina, a longtime victim of domestic violence, contacted her sister Rania from the scene of the altercation at approximately 3pm, stating that her ex-husband was refusing to hand over the children. According to the initial LBCI report, a group of armed men were also present at the scene, some of whom threatened the news team to leave the area immediately. Photos purporting to show several vehicles surrounding the scene, and blocking the road leading up to the residence, were also shown.

“We were ordered to leave al-Ghinneh or otherwise risk the possibility of being beaten or shot,” reporter Foutoun Raad said.

The team then headed to victim’s sister’s home in Zouk where Rania spoke of Lina’s ordeal, urging authorities to step in.

The story as reported by LBCI includes two versions; one as told by the victim’s sister Rania and the other as per a clarification issued by the Internal Security Forces and the husband’s attorney.

“Lina has been suffering for 20 years … 3 months ago, she called at 2 am to tell me that she had been kicked out of her matrimonial home -a version the [husband’s] family refutes, claiming she had willingly left. They even filed a complaint against her based on that allegation.”

Rania, who was with her son in hospital at the time where he was undergoing treatment, recalls asking Lina to return to her familial home, after which she proceeded to contact emergency services on 112.

“Lina called the Internal Security Forces’ hotline on 112 and so did I … to my surprise our efforts to report the case were met with uproar, as though they had already known of our intention to call,” Rania told LBCI.

“Lina is a longstanding victim of domestic violence, and there were many times where she could have been killed … She survived with God’s grace. Perhaps it was not her time to die, and become a matter of the past like Manal [Assi] before her. This is why we requested from her that she return to our home, after which we would take matters to court. We know that we cannot be like them, as they say they are the men of [former MP] Mansour al-Bonn and Rafik al-Bonn. His [the husband’s] family has been after us for years… the man’s been to prison, his family is also involved in criminal activity.”

“I urge the Security Forces to do its job. We have a court order on our side. I don’t want Lina to become a thing of the past; she is currently being held inside her [former] home in al-Ghinneh. We cannot reach her, nor can we contact her accompanying lawyer or the priest assigned by the Church to overview proceedings.

“The last time I spoke to her was at 3 in the afternoon; the time when the ‘thugs’ began to arrive. It seems that they coordinated with one another and she told me that they were armed. They will not allow her to collect her children, nor allow her to take her things.

“I beg you all, I do not want Lina to become a thing of the past. I just want the law to take its course. I call on the Interior Minister, head of the attorneys syndicate –we have a lawyer whom we cannot reach- a priest designated by the Church court to be there, and two policemen who accompanied Lina…. I call whomever may be of assistance to intervene. I know that there are people who are still good. I urge the judiciary, the ISF… We cannot stand to helplessly watch another victim go,” Rania pleaded.

LBCI later reported that Lina was released and taken to her family’s home under the supervision of the Internal Security Forces. Her children remain with her ex-spouse.

Mansour al-Bonn was not available for comment, LBCI said.

The Internal Security Forces later issued a clarification describing the events in an entirely different light. Below is a translation.

-The implementation process of the court order issued by the judge of urgent matters began at approximately 3:30 pm under the supervision of the Internal Security Forces in the town of al-Ghinneh.

-The supervising court officer attempted alongside the mother to “take the four underage children’s consent in a bid to implement the custody ruling, as it can only be applied with their permission.”

-During the process no altercation of any kind was recorded, nor were threats against the woman or her accompanying attorney made in said town.

-The two parties reached an agreement in the town’s municipal building in the presence of the head of municipality, the mokhtar, and the town’s priest.

The bureau of the defendant’s attorney, Charles Abi Saab, also issued a clarification on behalf of his client, Lina’s former husband Gaby Abi Saadeh, reiterating that the plaintiff had arrived in the company of a priest and her attorney Alexi Gergis to implement a court order that grants her custody. According to the latter’s statement, Lina’s underage children refused to leave their father’s home, leading the couple to settle on a previous agreement that grants the husband custody.

The bureau also denied the presence of armed men, stating that the vehicles seen before the couple’s residence were the result of crowds in neighboring restaurants.

As evident in the above, there are officially two sides to the story. Which version holds more certainty can only be determined after a thorough investigation in a court of law. However, there is one truth that cannot be ignored, and that truth is that the law has once again failed. The story remains ambiguous, yes, and the Internal Security Forces’ statement only attests to that, as no mention of the victim’s abuse was made. At the very least, the clarification issued by the authorities should have included an explanation regarding the two women’s failed attempts to report the case. Why that was left out of the ISF’s statement is a matter in and of itself.

Security Forces continue to boast of improved services, especially in cases related to women’s rights, yet numbers of domestic violence related deaths continue to rise and many go unreported. In short, the system has yet to gain the confidence of abused women, and seeing how this case was handled, there is no questioning why.

According to a local women’s rights organization KAFA (Enough Violence and Exploitation) at least 9 women have been killed in domestic violence cases between August 2015 and June 2016. The numbers continue to rise, and unless there is a clear stance by lawmakers and ministers, the status quo will continue as such.

Another factor to take into account is former MP Mansour al-Bonn’s silence on the matter at hand. In cases where there are claims tying former or active members of parliament or other officials to unruly behavior, it is customary that a statement be issued denouncing those claims. None so far has been made.

Internal Minister Nuhad Mashnouk has yet to comment on the situation as well. According to LBCI reporter Foutoun Raad, he was reached for a statement, but has issued none to the media thus far.

This is an abhorrent failure on the part of our ministers, lawmakers and police force. Question is, should we really be expecting more, seemingly since “some” members of our own parliament still see women as a factor of causation in “some” rape cases? I think not. The only thing I can hope for is for women in power, as short in numbers as they may be, to actually take a decisive stance once and for all.

The dolphin deaths and why we are all responsible

Tue Sep 20 , 2016
Over the weekend social media was set ablaze after the photos of a dead dolphin, which was discovered on Tabarja beach, north of Beirut, were […] 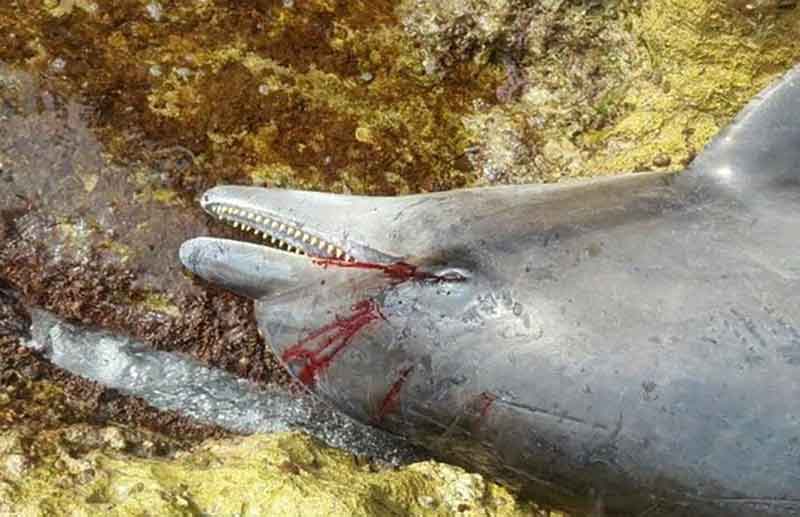