As though it were not enough that several species of marine life are suffering the consequences of our collective inaction, namely turtles who come to our shores during the warmer seasons to nest, they are now increasingly becoming victims of malice and ignorance.

In the most recent violation of agriculture law 1/125 that prohibits the poaching of marine animals that include whales, turtles, and sea lions, a sea turtle was reportedly** pulled out of the water, hit repeatedly on the head with a sharp object, and used as a prop for selfies and selfish child play.

The turtle was then left for dead on the shores of the Havana beach in Rmeileh, ironically 48 hours before World Sea Turtle Day, which is celebrated on June 16.

The Civil Defense Marine Rescue Unit was contacted shortly thereafter by Greenarea, an environmental NGO, to transport the injured turtle, who’s now in critical condition, to another location. The Ministry of Environment and Animals Lebanon*, an animal welfare NGO, were also contacted.

This is not the first time sea turtles and other marine species are treated in such a manner. In August 2015, a similar incident was reported off the coast of Tyre involving the manhandling of another marine turtle that had made it to the shore to lay its eggs. Instead it was captured, abused, and photographed.

In the past months several marine turtles were found dead off the coasts of the Costa Brava beach (where preparations of a seaside dump are underway), and Aadloun, with the main cause of death being water pollution, lannate poisoning, and dynamite fishing.

I have written several times on the subject, highlighting the correlation between marine biodiversity, namely the vital role of marine turtles, and our quality of life. I will do it again now.

If marine turtles are unable to lay their eggs in the manner in which they are supposed to during the warm seasons, they will decline in number. If that happens, it will have a direct impact on us. Here’s why:

– Sea turtles eat jellyfish (almost 200KG per day, per turtle), preventing the reproduction of large blooms that would otherwise wreak havoc on fisheries, recreation, and other maritime activities.

– Coastal dune ecosystems rely on the nutrients deposited by sea turtles that come to shore during the warm seasons to nest. Sea turtles use sandy beaches to lay around 100 eggs per nest, 3-7 nests per season. Not all will hatch and not all hatchlings will make it out, thus becoming the much needed nutrients for beach vegetation, which in turn prevents beach erosion.

– Sea turtles are keystone species. Without them, the health of sea grass beds – which in turn provide breeding and developmental grounds for many species of fish, shellfish and crustaceans – deteriorates. The reactions could result in the decline of several marine animals dependent on sea grass beds for survival.

– If sea turtles go extinct, the entire health of the ecosystem will be affected because if one goes, the rest will follow -us included.

I cannot stress enough how vital it is for us to recognize this as newsworthy. Awareness and change begins at home. Our sea turtles and other marine species must be protected. Municipalities, concerned ministries, and NGOs must do their best to organize workshops that aim to raise public awareness on the importance of maritime biodiversity. A budget must be allocated to the reinforcement of the Civil Defense Marine Rescue unit in order to help thwart attempts of abuse and dynamite fishing and help monitor our shores.

Lebanon’s environment as a whole is under threat. We have a myriad issues to tend to that include forest fires; the decline of marine life; sea, air, and land pollution; frenetic shoreline construction; and of course the infamous garbage crisis. There is already too much on our plates and we can’t keep adding fuel to the fire. Climate change is a reality we can’t choose to ignore. It will not go away if we look in the other direction. It’s time we pay attention to such news and take it for what it is: a reflection of our reality and a projection of what’s to come if we continue to live life the way we do.

*UPDATE: I was contacted by Animals Lebanon on Thursday and was told that the turtle is receiving the needed treatment. It’s on its way to what we hope will be a full recovery. The object used to hit the turtle was identified as “sharp” in line with the original report and is presumed to be a stick.

**UPDATE 2: On Friday the Greenarea.me team received a clarification from one of the beach-goers present in one of the photos. In the voice-note, the woman states that she and others were attempting to help the turtle and that the child who was held above its shell did not actually touch the marine animal. To read the full statement, please click on this link.

10 thoughts on “Selfie culture: Marine turtle pulled out of water and repeatedly hit on the head in South Lebanon”

Whale pod spotted off the coast of Dbayeh, north of Beirut, despite rampant sea pollution 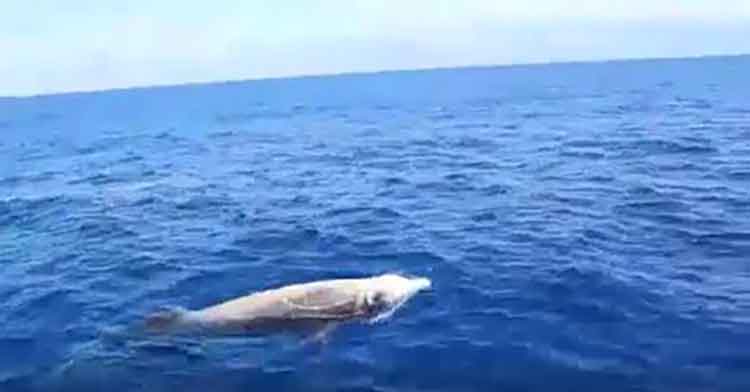