Maarouf Hamieh kidnapped and murdered the nephew of Mustapha al-Hujeiri (Abou Taqiyeh) over the grave of his son, Mohammad Hamieh, a Lebanese army soldier, who was gunned down by Nusra Front militants in Arsal almost two years earlier.

22 year-old Hussein al-Hujeiri’s body was found Tuesday riddled with over 30 bullets in eastern Baalbek’s Taraya, where the grave lies. His prime fault being familial association.

Some reports alluded to Hussein al-Hujeiri’s involvement in paramilitary activities that targeted Lebanese security forces, but those reports were inaccurate and were only referring to his namesake. Hussein was kidnapped in Balbek’s Ras al-Ain, after he had taken part in a United Nations-sponsored meeting aimed to discuss the Syrian refugee crisis.

Mustafa al-Hujeiri, the victim’s uncle, is a fugitive Islamist cleric. In October 2014, an arrest warrant was issued against him on charges of affiliation to al-Qaeda-linked al-Nusra Front. In 2014, the al-Nusra Front killed Lebanese soldier Mohammad Hamieh, whom it had been holding in captivity.

Hamieh was among troops who were kidnapped by the Islamic State and al-Nusra Front militants in the wake of deadly clashes that erupted in the northeastern border town of Arsal. Over 17 troops were killed in the fighting and 35 soldiers and policemen were taken hostage. The Nusra Front later released seven security personnel while IS executed two army troops. Later in 2015, 16 soldiers were released while nine remain in captivity.

Vigilante justice in the absence of authority:

The vacuum left by the absence of our nation’s government has created a fertile environment for the propagation and recurrence of vigilante justice. Far from being just, it is often aimed at targets of convenience. In addition to that, it encourages others to seek revenge against those who exercise this form of justice, thereby contributing to an endless cycle of an eye for an eye violence.

In the wake of events, movements were detected in the Qalamoun region where fighters of the Nusra front remain. An attack against a Hezbollah post in Flita was also reported. Mustapha al-Hujeiri has denied information that suggests that he had called for a retaliatory attack, alluding to the possibility of coincidence in regards to the aforementioned operation.

The region is now under tension.

Reactions as fears of tensions rise:

Newly elected mayor of Arsal, Bassel al-Hujeiri, condemned the killing, and called for the calm in the wake of events.
“What happened today is a total departure from the state and its institutions. We were seeking to open a new page, but it seems that the wounds of past events have yet to heal … The young man who was killed today had nothing to do with the actions of his family,” he said.

Bassel al-Hujeiri persuaded family members and friends to bury the victim, which was executed in an atmosphere of high alert, mourning, and heavy gunfire.

“We must remain vigilant and practice caution in the face of regional and local developments. We must be patient and resort to dialogue in our quest to maintain civil peace.

“I call on our people in the Bekaa, our clerics, officials and friends to exert extra efforts to prevent the progression of events that took place on Tuesday. The Bekaa must not become a stage for revenge killings,” he said.

The Future Movement issued a statement on Tuesday condemning the murder of Hussein al-Hujeiri, and calling for the intervention of the Lebanese government and political parties to exert all efforts to avert any possible strife.

“The killing of al-Hujeiri doesn’t bring the soldiers back to life,” the statement said.

The movement considered the killing as “failure to justice and the national sacrifices made by the Lebanese soldiers, and one that paves the way for dangers that threaten national peace and serves the goals of terrorist groups.”

The country’s major news outlets including Al-Jadeed, MTV, LBCI and OTV, descended on the story like vultures on a carcass. The photos of the victim were displayed on television screens and the outlets’ respective websites. Had there been a video of the crime as it took place, the media would have aired that video as previous experience has shown us.

The reports mainly focused on Maarouf Hamieh, granting him a platform for the sake of ratings. Hamieh’s remarks, irrespective of whether one would consider him a hero or a villain, succeeded in vocalizing the crime over the span of many hours, provoking those who were related to the victim, and raising the state of alert of surrounding towns.

Rarely have we seen our media exercising dignity in reporting the events, but rather tragedies are often turned into a very lucrative circus. In this case, compliance played a major role in gaining access to the story. Reporters shyly questioned the actions of Hamieh. To do so would have either had negative ramifications on access and future stories, or had likely placed them in danger.

But is compliance the fair price for access? It shouldn’t be, not when public opinion is directed by the news for hours at a time. The responsibility of the media is too great. For the sake of ratings, TV channels gave to a confessed murderer, a platform from which to boast and inflame tensions. For the sake of ratings, the deceased was made into a prop in order to attract the morbid fascination of viewers.

If a violent conflict erupts from this murder then it is foremost the media who is to blame. The media who have for the sake of securing access given a platform to a man who admittedly intends to take more lives, and who broadcast the gore of a bloody murder for the sake of ratings is not only complicit with those who might take up arms, but is as culpable as the organizers of such paramilitary actions.

Vengeance as a culture:

Maarouf Hamieh was right in requesting that the government who collects his taxes act on his behalf and prosecute the guilty party whomever they may be. He was also right in waiting for a year and 8 months as the judicial system did nothing and the people who allegedly aided the murderers of his son continued to be out of reached by the consequences of their actions. But in the absence of authority fate had found him unable to resist the impulse of seeking justice on his own, aided merely by loyal friends and family.

The justice he sought was blunt and bloodied. It lacked the fairness and refinement of a courtroom. It lacked the comforts of a prison cell, within which the powerful prosper and from which the connected are released. Most importantly, the justice which he sought fell short of targeting the right person.

Whether the victim is innocent or guilty is not the point. The murder of any accused without thorough and impartial investigation, without giving them access to every legal avenue through which they may defend themselves is undeniably wrong. In this context of revenge killing and counter killing, it could have happened to anyone with the same last name, seeing that Maarouf Hamieh had put the blame on the al-Hujeiris for the killing of his son, namely Mustapha al-Hujeiri (Abou Takiyeh), former Arsal mayor Ali al-Hujeiri (Abou Aajineh), and former Mukhtar of Arsal Mohammad Ali al-Hujeiri (Bou Ali al Asfour), the victim’s father.

In the absence of justice, the culture of vengeance reigns supreme.

The urge to avenge the wronged, and to right the wrong by any means exists within all of us. Our nation is like an archipelago of cultural islands, who share much but can only see their differences. We are separated by a turbulent sea of mistrust and misunderstanding. But we are all in effect vengeful.

In the wake of this particular case, online commentators parted into two opposing groups. The verbal conflict that ensued echoed the divisions in our society and in the media, mirroring the very real tension that currently simmers on the edges of our nation.

But this is not the first time. Those of us who are fortunate enough to dwell in the island of urban civility, who would not immediately reach for a firearm, have grown accustomed to using words as deadly weapons rather than as means of forthright debate. We do not seek to convince our adversaries, but rather to destroy them, to shame them out of their discussion, to raise the drawbridge between us who agree and them who do not. We do not rely or even wait for facts. The instant gratification that comes with immediate condemnation is far greater.

However, it comes at a high price. By doing that, we cultivate and reinforce a culture of segregation. Our ideas become incestuous. Our discussions limited to an echo chamber. When a person speaks their opinion and we find it displeasing, we seek revenge in the virtual sphere rather than exercising a minimum of empathy and seeing them as people who like us hold certain beliefs that were shaped because of their surroundings.

In that respect, those without direct access to firearms are no different than those who are. The culture of vengeance and vigilante justice exists within our collective consciousness and unless we recognize it, the cycle of violence will continue.

2 thoughts on “Vigilante justice, the media, and the murderer”

Fri May 27 , 2016
Activists protesting the Jannah dam have been notified of the Governor of Mount Lebanon’s decision to halt construction works at said dam, Lebanon’s Legal Agenda […] 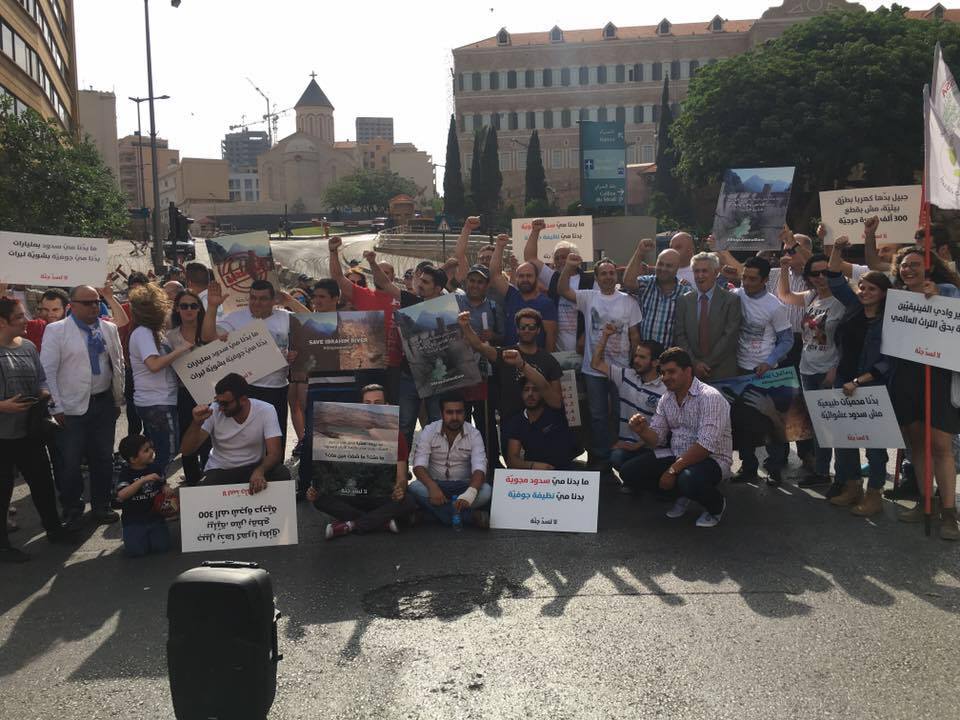