Far from any semblance of conflict, children and innocent bystanders are falling victim to the arbitrary use of guns in both celebrations and funeral processions. As this blog post is being written, 11 year-old Hassan Hussein Kheireddine lies on a hospital bed after receiving a bullet to the chest, which had been fired upward in celebration in the wake of the announcement of election results in his hometown. Similarly last week, 15-year-old Hussein Ahmad al-Arab was also reportedly hit by a stray bullet in Bourj al-Barajneh’s Ain al-Sekkeh neighborhood. He survived miraculously.

But for 16 year-old Ahmad Ibrahim, a student, and Wissam Bleik, a first sergeant at the Beirut Fire Department, this is not the case. Ibrahim died as a result of the wounds he sustained while playing football in his hometown of Marj in Lebanon’s West Bekaa after election results compelled many to fire into the air. Bleik succumbed to a head injury while in a moving car that contained members of his family. An al-Jadeed report alludes to the possibility that the bullet that struck him in the head might have been intentionally aimed. [update here]

In March, an 8-year-old girl was killed when a stray bullet struck her from a stream of gunshots launched at a nearby funeral procession in the village of Qartaboun, north of Beirut. Petina Raidy, like other victims, had nothing to do with the circumstances that lead to her death.

Gunfire, whether in celebration or in mourning, is only the symptom of the disease that is our nation’s gun culture. There is a great possibility that the occurrence of such events, would not be so repetitive had personal firearms not been so readily available in our society, and had the majority not accepted the pulling of a trigger as the mere display of manhood.

Those who are prone to firing as a means of self expression are encouraged and emboldened when they see the partisans of their sectarian masters doing the same, even as those same masters shyly condemn the practice on the media. It’s an inherited trait, one that has been championed by the major parties of our nation for generations and one that has established itself as a method for exhibiting dominance and power.

-But it transcends that:

Zeina Khalil was only 16 years old when she was shot to death by her neighbor Mohammad al-Hassan last week. According to reports, he had asked for her hand in marriage during the grieving period for her father who had died 15 days before the shooting. The defense lawyer is laying down the groundwork for a legal defense based on mental instability. He insists that the accused is prone to excesses of violence, most often perpetrated with his firearm. He cites occasions when the man would fire skyward to antagonize his mother.

Zahraa al-Kabout, Sara al-Amin, Rouqaya Mounzer, Nisrine Rouhana are just a few names in a long list of women who were also shot to death by their respective spouses [and former spouses] in the past few years. Though the names may change, and the circumstances may fluctuate, the story is always the same: it’s a cycle of absurdity that keeps repeating itself, whether in the context of intentional murder or as a consequence of celebratory gunfire.

Access to guns is insufficiently regulated. Many view their possession of a firearm as a mere extension of their civil rights. The appeal of a weapon is difficult to reason away, as it is also often seen as the manifestation of a person’s power, being exercised through the pulling of a trigger. We seem to have grown numb to the notion because of the frequency at which tragedies of the sort are made known. We forget that each occurrence is the irreplaceable loss of a human life, and we merely shyly request that the situation be ameliorated.

Although the circumstances differ, victims like Zeina, Nisrine, Rouqaya, Wissam, and Ahmad might have survived if not for the immediate availability of a firearm, which always renders an immediate and conclusive response attractive to a person who would view a weapon as a toy.

-Not enough is being done

The Internal Security Forces have launched and encouraged the propagation of a hashtag on twitter, which asks “would you be willing to kill?” [#بتقبل_تقتل] in an attempt to raise awareness on the dangers of senseless gunfire.

Health Minister Wael Abou Faour has urged the Lebanese state security and judiciary apparatuses to put an end to the phenomenon. But is this enough? The response has been mostly verbal, leading many to ask why have no substantial actions been taken to limit these occurrences.

The unsubstantiated use of firearms permeates our culture. It is a burden that the body of this nation should reject like a toxin or otherwise continue to suffer the consequences of this madness. If we do not then we should all plead insanity before court, or else be found guilty of having been silent when speaking out against this deadly trend was vitally needed.

Mon May 23 , 2016
Thousands of residents cast their vote in the third phase of Lebanon’s municipal elections on Sunday. Voter turnout was marked at approximately 48.15% and categorized […] 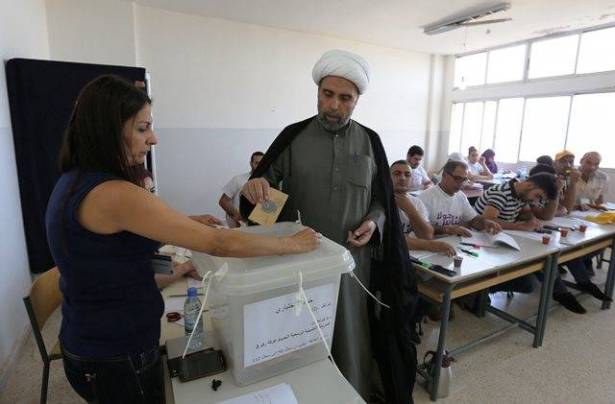