Behind the scenes and away from public eye, a deal was struck. Profiting from public disinterest in the issue, Minister of Agriculture Akram Chehayeb approved a partial deforestation in the Jannah natural reserve for the purpose of erecting a dam in this location.

Environment Minister Mohammad Mashnouk made his objections known, citing multiple reasons that indicate why the site is unfit for the installation of a dam. He has called on Cabinet to review the decision on its construction.

The Jannah dam project was approved by the Hariri administration in 2009 as part of the tenth fold plan to build dams across Lebanon.

Construction began in March 2013 in Adonis valley, and was proposed under the pretext of alleviating the country’s water shortages.

The initiative came to a halt shortly thereafter partly due to the recommendation of the German Federal Institute for Geosciences and Natural Resources, whose study of the concerned valley indicated that it is unfit to house a project of the sort.

Consequently, the opinion of Khatib & Alami, Artelia and Safege, a French company, was solicited. The latter’s conclusions were initially anything but encouraging, but after correspondence with the Ministry of Energy, the company gave its approval only after expressing reservations. Work resumed but not without interruption.

Today the project is being championed by the Free Patriotic Movement, and its biggest objector is the Ministry of Environment, backed by the Prime Minister and various other parties.

If successful, the project would be a great stride towards supplying sufficient water and power to populations who are arguably less fortunate than capital dwellers.

If it fails the consequences will be dire.

Let us examine the two scenarios.

As part of a water strategy heralded by the Ministry of Energy and Water that includes 55 infrastructure projects to be contracted by 2020, the prospective dam is expected to supply 700,000 people in Jbeil and Beirut with drinking water, as well as supplying Jbeil and Kesrouan with agricultural water. According to FPM MP Hikmat Deeb, the dam could provide water to 3 million people. The energy output is expected to be 4 megawatts.

In a recent press statement, Foreign Minister Gebran Bassil cited the benefits of the dam. The numbers in his statement differ greatly from previous assessments. According to the man who acted as Energy Minister when the proposal to build the dam was approved, the energy that would be produced would greatly exceed the previously estimated 4 megawatts, to reach 100 megawatts. Furthermore Beirut would benefit from 30 million cubic meters of water, while Jbeil would receive 8 million cubic meters.

Among all the energy producing and water distributing initiatives available to the nation, the construction of a dam, in theory, is by far the most sustainable. The power station output in regards to carbon emissions is limited to the energetic cost of producing the turbines themselves, and the retention of a large body of water during rain season for later use is an ancient technique, which has yet to fail.

Other dams have become attractive locations for the exercise of water sports as well as for the cultivation of certain fish. A similar fate is predicted for Jannah, according to its advocators.

Disadvantages if it fails:

The rupturing of a dam is admittedly a rare occurrence. Very few dams in the world have failed so catastrophically so as to release the water that they contain, but every time it has happened, the results were dramatic. A total failure of the dam wall would result in the flooding of the valley that lies before it, annihilating fauna, flora, historical sites, and residences within.

The Potential Failure Mode Analysis of the Jannah Dam, as presented by Gicome, a consulting firm, identifies seismic loading and flood overtopping as the main potential failure modes. The Gicome study also predicts that the dam will leak an estimated 35 to 53 percent of its load.

Why the dam is controversial:

A fault line traverses the location on which the dam is to be constructed. According to Environmentalist Paul Abi Rached, 3 branch-lines surround the location where the dam wall is set to be built, which greatly increases the possibility of catastrophic failure if an earthquake occurs.

Geologists have also warned that the area’s composition consists of carbonates, which form karst, or karst containers. The latter are a type of fractured rocks that melt in the rain and create caves. Karsts, as a geological structure, do not make for suitable conditions when it comes to dam construction. An example of this can be seen in the Brisa dam whereby vertical leakages resulted in an obsolete structure that holds no water. Brisa took 12 years to build and did not hold a single drop of water.

Although the price in fiscal terms has been estimated at $42 million per annum, the true environmental cost can not be measured in any currency. The region is home to 70% of the local biodiversity. It is by far the richest environmental site in the Middle East. There are 404 species of flora, 739 species of invertebrates, 32 of mammals, 140 of birds, and 6 of amphibians. The dam will not only bring about extensive deforestation [anywhere between 51,000 and 1 million trees], but also endanger the above-mentioned fauna and flora, destabilizing the precarious natural balance of surrounding regions.

51,000 trees means 51,000,000 KG of CO2 will not be absorbed, according to the AUB conservation center (NCC) bulletin. It also means loss of habitat to countless of species, the destabilization of an ecosystem, and the dismantling of a weapon that can be used in the fight against climate change.

On a historical note:

Long before the establishment of our nation, ancient civilizations, including the Phoenicians and the Romans, had revered this location sufficiently to erect both infrastructural constructions and religious sites throughout the valley. The remnants of these ancient empires are collectively owned and irreplaceable. They are part of our patrimonial heritage. The potential construction site is expected to span the area containing these structures. Methods of disposal and conservation have yet to be disclosed.

The estimated net cost of construction stands at $1 billion according to Paul Abi Rached. $80 million have been paid so far in national appropriations of private lands, studies, and the execution of the first phase.

-Price of delay: In case our government is in breach of contract, the taxpayer is expected to carry a burden of around $100 million. This will not come out of our depleted treasury, but rather out of the pockets of the average citizen.

-Price of maintenance: Consecutive studies have affirmed that the site is unfit for a dam. The site lies above no less than 3 branch lines, and for lack of bedrock the soil that is to contain the water is composed of very absorbent karst. These issues are very likely to raise the cost of maintenance if the project goes through.

-Price in lost touristic revenue: Studies have shown that the retention of a large amount of water in this precise location is likely to influence the level of surrounding bodies of water, most eminent of which is the Jieta Grotto. The amount of revenue that will be lost is not yet estimated but judging from the complaints of Grotto management when other crises have forced it to shut down temporarily, we can assume that they are expected to be high.

The seasonal revenue from ecological tourism is hard to estimate but the construction of the dam will effectively annihilate surrounding touristic sites, which provide financial support to surrounding regions.

The final nail in the coffin:

The Brazilian company contracted with building the dam, Andrade Gutierrez, recently agreed to a plea deal with federal prosecutors for its alleged role in a massive corruption scandal centered on state oil company Petrobras. Andrade Gutierrez is one of dozens of construction companies under investigation for their alleged roles in corruption scandals.

The company in question is a member of the construction consortium of another highly controversial dam in the Amazon rainforest: the Belo Monte.

Although Lebanon has 10 billion cubic meters of water in rainfall and snow, 1.3 billion of which is surface water, including rivers, springs and lakes, it suffers an annual water deficit of 425 million cubic meters.

The volume of underground water, which leaks through karsts to form a renewable water reserve, is estimated at about 3 billion [cubic meters]. If we do not use this water, it will go to the sea.

Alternatively, the project may be substituted by a cluster of smaller dams that do not exceed the price tag of $100 million, posing a lesser threat to the environment, if Paul Abi Rached’s assertions are correct.

I cannot believe that for the fist time in many years, I am siding with the Environment Minister, a man who has become synonymous with Lebanon’s incapacity to resolve the garbage crisis. I agree with him solely due to his current stance on this very issue. If he is revealed to be politically motivated, as the FPM suggests, then he deserves no credit for having held an accurate stance.

If supporters of the dam intend to champion their position they must endeavor to do so by making all the information available to the public. They should also explain how the studies that support the dam are more legitimate than equally substantial studies that imply the opposite. This issue should not be seen as an opportunity for a political tug of war.

Attachment to the environment should not be dismissed as mere sentimental fancy. Our quality of life is intrinsically linked with the extent and the health of the natural landscape. The issue of natural conservation should not be wielded as a political weapon against the opposing party. The environment will not withstand being used as a political prop on which the indifferent members of the ruling class bicker irresponsibly for the purpose of marking points in an endless political game where participants profit and spectators suffer. The environment is our home.

Update 1: Construction works at Jannah dam have been temporarily suspended pending final decision. For more details click on this link.

Update 2: Construction works on Jannah dam ongoing despite order of cessation. For more details click on this link.

Mon May 23 , 2016
Far from any semblance of conflict, children and innocent bystanders are falling victim to the arbitrary use of guns in both celebrations and funeral processions. […] 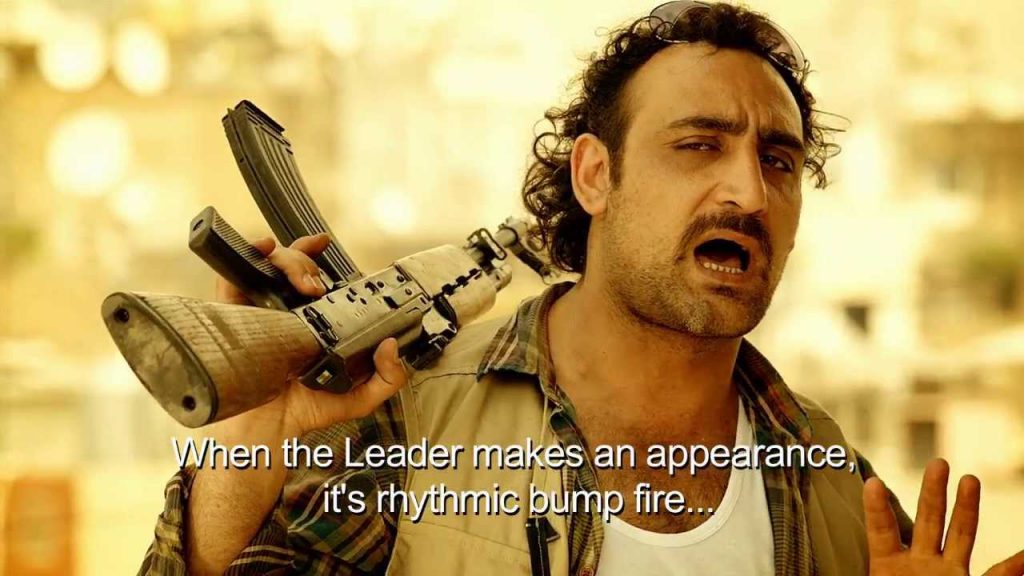