[Update] The fox has since been released.

A wild fox has been captured and is being offered for sale for $350 on the Buy and Sell Lebanon Facebook page; a virtual marketplace. The post specifies zoo owners with the assumption being that no other person would be interested in the acquisition of such an animal. This journalist’s opinion however is that the seller here intends to make the sale of the fox to potential taxidermists or skinners seem humane by referring to zoos rather than to those questionable occupations.

In the best of conditions, a zoo is an inhumane form of captivity that both oppresses ever-rarified animals and depletes the casual visitor of their empathy. Although zoos may be a preferable ending to the fox’s path rather than being displayed as an undecaying carcass in someone’s living room, or a callous extension to a woman’s vanity, the act of capturing a wild animal in springtime is extremely egregious. According to article 7 of Lebanon’s hunting law, no winged or earthbound wild animal is considered the property of anyone, not even the owner of the land on which the animal was found. These laws however are rarely enforced.

It is widely known that Spring is the season during which wild animals mate and care for their newly produced young. Unfortunately this places them in a vulnerable state. This is why every nation with respectable and well enforced hunting and trapping legislation regulates the practice to protect both animals and the people whose health depends on a precariously balanced nature.

In almost every region across Lebanon, deforestation and frenetic construction is depriving previously thriving populations of countless species of their habitat, as well as cheating the citizens of the green lung, which renders life bearable when in proximity to residential areas. There is no political will to enact legislation that reaps its rewards long after the term of any current politician has ended. This is why it is incumbent on us humble citizens to exert pressure on our legislators and incentivize them to think ahead for our children and theirs.

This fox is a victim of unreasoned greed, and it is blogger’s opinion that the precious animal will not see past its purchase.

It is assumed that one’s social conscience regardless of one’s socio-economic status may compel the temporary possessor of captured wildlife to release it within the perimeters of an established nature reserve, but the profit motive as always seems to overpower every tenant of one’s humanity.

I hope that concerned authorities and animal rights groups act in the best interest of the animal whose life is in grave danger. I also hope that this post finds the trapper well and open-minded and willing to return the animal to a semblance of its natural habitat.

Sat Apr 30 , 2016
On the surface, this candid photo captures a moment of childlike behavior, with three Aleppan children sitting on the side of a Beirut street playing the way […] 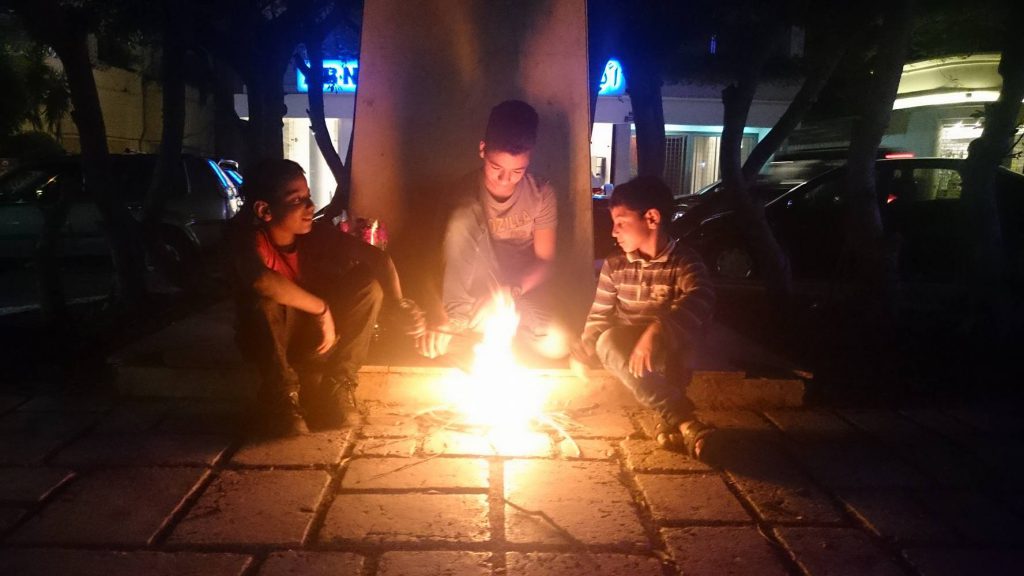